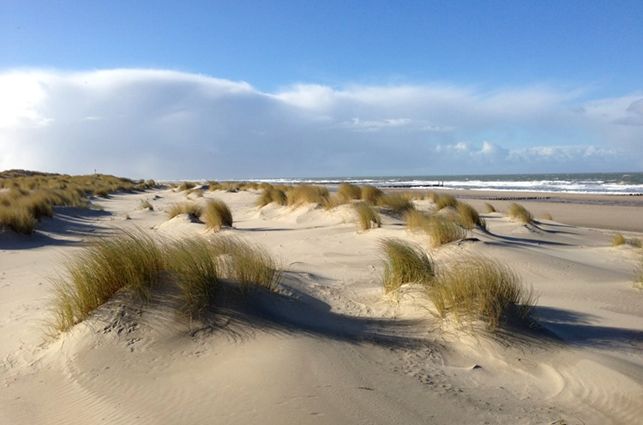 Forget Amsterdam, boring polders and dull villages. The hiker who knows the Netherlands only superficially will be surprised. The E2 runs for the most part along the coast and across the island of Goeree-Overflakkee and skirts the islands of Sint-Philipsland and Tholen, where the effect of the sea tide will be noticeable. A large part of the route is unpaved or consists of quiet cycling/walking paths or green dike paths. A number of historic towns you pass through, such as Maasland, Brielle, Goedereede and Bergen op Zoom, are picturesque and show a less known side of the Netherlands.

At a short distance from Hoek van Holland, on its way east along Nieuwe Waterweg, E2 runs at viewing distance from Maeslantkering, world’s largest movable storm surge barrier. It is to close Nieuwe Waterweg in the event of an announced storm surge. Haringvlietdam, Grevelingendam and Philipsdam are also part of the huge Deltawerken that took 50 years to complete.

The guide describes the Coastal Path from Hoek van Holland, where the ferry arrives from Harwich (GB), to Bergen op Zoom. Actually, the description and maps are up to the Youth Hostel Stayokay Bergen op Zoom, in a forest area near the border where E2 connects to the Belgian GR5 to Maastricht.

The walking guide is in Dutch, but you’ll understand enough to plan and find your way.
About half of the route description and maps in the guide are about the E2. The route can be walked in both directions.

White / red is the way sign in Netherland for long-distance paths. The route is waymarked in both directions.

From the start in Hook van Holland to Goedereede (approx. 65 km) the route runs together with E9 (European Coastal Path). E2 also has a common part with E8 around Brielle.

During the first day’s distance, the walker is still close to the busy port area of Rotterdam. But the route soon becomes very pleasant with footpaths, bicycle paths and green dike paths. Netherland is densely populated, but this is not noticeable outside the major cities in the west of the country. In the countryside you will find accommodation, especially B&B’s, campsites and public transport mostly within walking distance. Don’t hesitate to speak to people and ask for information along the way. Most Dutch people speak some English, the elderly also German and some French. The general attitude towards foreign walkers is open and friendly.

–  vriendenopdefiets.nl/en. Literally friends on bicycles, but walkers are also very welcome. Almost 6000 listed guest addresses can be found, often near hiking and biking trails. Do not expect a four-star accommodation, but do count on a clean bed and a hearty breakfast against a friendly price. Once you’re registered as a Friend (€10/year) of this non-profit organization you can search online for guest addresses along the route, or use of the guest address booklet.

– bedandbreakfast.nl. Also available as an app in English, German, French, Spanish and Italian language. Sometimes it is easier to mail or phone directly to the wanted address. Use google.maps (the bed icon) to identify the desired B&B address; in most cases address details or a website will appear when you click on the location.

Campsites are cheap, safe and mostly comfortable, prices between € 10 and € 20. There are sometimes possibilities to camp at a farm site (cheaper). We advise to use google.maps and enter ‘camping’ in the search box. See also:

– mijn.natuurkampeerterreinen.nl – Camp sites in nature, about 130 addresses in NL. Website also in English, German and French.

There are many campsites near the route, but it is sometimes difficult to find the right addresses. Ask local people or simply ask at the end of the day the owner of an attractive site if you could put your tent there for one night. (Wild camping is officially prohibited in NL; enforcing the ban is a problem, however.)

There is enough food for every budget. It is sometimes difficult to find simple eateries in rural villages. A ‘cafeteria’ offers a simple hot meal: French fries, a meatball and sometimes fish. Bread, vegetables and fruit are cheap in shops. Your guide will give you some information (icon coffee cup on the map means café or restaurant), but also use google maps on your mobile phone.

Stations and bus stops are indicated on the section maps in your guide. Find your favorite public transport app to help you out.

Buses and other public transport:  9292.nl/en

The experienced hiker does not need special footwear or clothing in the Netherlands; normal hiking equipment is sufficient.