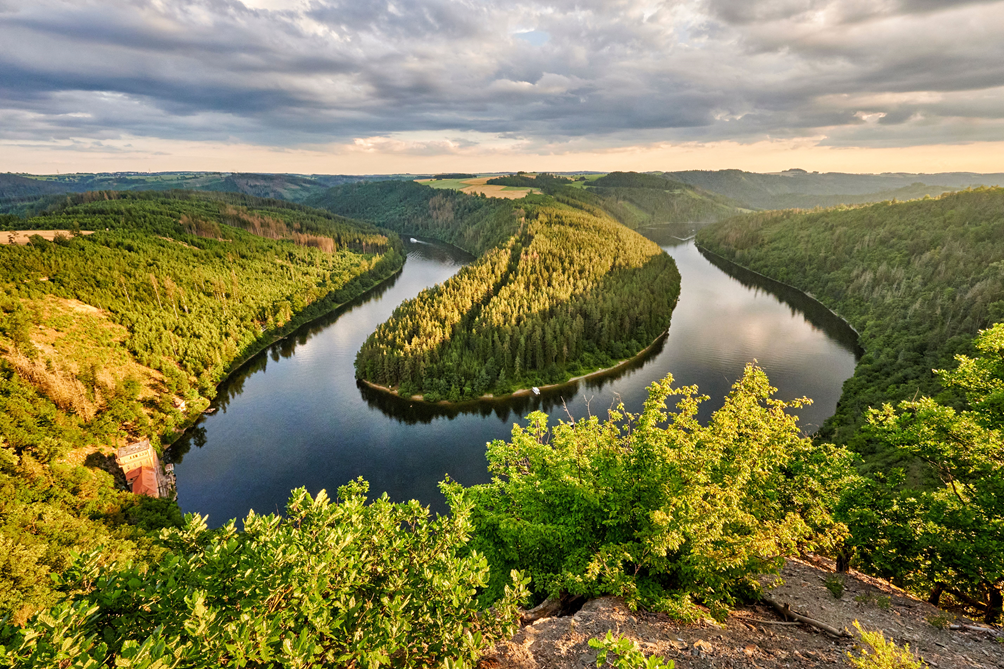 The E3 runs through scenic low mountain ranges in Germany. These developed from a coherent high mountain range (Variscan Mountains), which in the Palaeozoic period stretched from the French Massif Central to southern Poland, i.e. its east-west extension corresponded almost to the entire E3 in Europe.

In Germany, the trail passes through 10 nature parks and touches 2 national parks.

From the town of Schengen in Luxembourg, the E3 first crosses the border river Moselle to Perl. Schengen is significant because of the international agreement concluded here, in particular to abolish stationary border controls in Europe.

From the Moselle valley, the trail leads to the Saar and past the famous river bends at Mettlach and Cloef to Saarburg. The E3 continues to the Rhine valley via the Hunsrück, a densely wooded and sparsely populated mountain range running NE. The Hunsrück-Hochwald National Park and the Soonwald Nature Park are crossed on this route.

At Kaub, the Rhine is crossed on a scenic river section.

In the Taunus Mountains, on the northern edge of the cities of Wiesbaden and Frankfurt/Main, the E3 reaches the “Limes”, the historic, strategically important border fortification of the Roman Empire. Continuing eastwards, the E3 crosses the “Vogelsberg” nature park before reaching the touristically interesting city of Fulda. The city is a political and cultural centre with a bishop’s seat. The cathedral St. Salvator is considered the town’s landmark.

East of Fulda on the Milseburg mountain, the E3 meets the E6 and runs south of the Thuringian Forest through Bavaria.

First, the E3 Bavaria leads through the Rhön mountains. The Rhön (biosphere reserve) lies at the intersection of the federal states of Hessen, Bavaria and Thuringia. The cone-shaped individual mountains of the “Kuppen-Rhön”, which owe their formation to the volcanism of past eras, are particularly impressive.

On the Wasserkuppe (950m), a well-known viewing and excursion destination, the E3 crosses the highest mountain in the Rhön. Further on to Coburg, the route passes through the Hassberge Nature Park.

The Franconian town of Coburg with its large historic old town is dominated by the “Veste Coburg” castle. The “Veste Coburg”, also called the “Franconian crown”, is a worthwhile destination with its restored large castle complex.

The E3 now runs through the Franconian Forest (quality hiking region) to the Fichtel Mountains.

With the Großer Waldstein (877m) and the Schneeberg (1051m), two hiking destinations with special distant views and mountain inns are crossed in this mountain range with excellent tourist facilities.

At Wunsiedel, the common course separates with the E6. The E3 turns sharply to the north and leads past the town of Hof to Ölsnitz / Vogtland.

Eisenach is the start of the only long-distance hiking trail in the Eastern Block countries, the “International Mountain Trail of Friendship”. It was opened in 1983 and leads from Eisenach to Budapest as the EB. In 1990, the EB was declared the European Long Distance Trail E3.

There is an active interest group of the “conquerors” of the 2690km-long EB, which maintains the tradition (HP.Paschold@Hotmail.de).

Eisenach has an old town worth seeing with historic buildings of national importance. First and foremost is Wartburg Castle, towering high above the city. Here the important reformer Martin Luther translated the Bible into German during his imprisonment.

The E3 leads past Wartburg Castle to the Rennsteig, one of Germany’s best-known and most traditional long-distance hiking trails. The E3 follows this trail in an easterly direction through the Thuringian Forest Nature Park, past the Inselsberg (916 m) and through the winter sports centre of Oberhof. In Neuhaus am Rennweg, the E3 branches off from the Rennsteig and leads via the Schwarzatal valley to the Saale river and the city Saalfeld, which is also known as the “Stone Chronicle of Thuringia” because of its preserved medieval buildings.

Following the Saale valley, the E3 reaches the Saale dam cascade at Kaulsdorf, an approx. 70km long stretch of river with 5 barrages. The Hohenwarte and Bleiloch dams (Germany’s largest) have created a fjord-like landscape in the densely wooded area.

At Saalburg, the E3 leaves the Saale and leads to the Saxon state border at Schleiz. Via the city Plauen, the E3/EB Thuringia meets the E3 Bavaria in Ölsnitz/Vogtl.

On the continuing section of the E3 over the Ore Mountains to “Saxon Switzerland”, however, the E3 and EB have two separate routes and cross each other several times.

The Ore Mountains are an interesting hiking area in terms of landscape and cultural history.

In 2019, the “Montanregion Erzgebirge / Krušné hory” was declared a UNESCO World Heritage Site. It is a unique, large-scale cultural landscape that dates back to silver discoveries in the early Middle Ages. The Ore Mountains developed into the most important source of silver in Europe at that time. Pioneering technologies were developed here that decisively shaped the economy and state systems in Europe.

Near Königstein with its important fortress, the E3 reaches the Elbe Sandstone Mountains with the “Saxon Switzerland National Park”. Here, not far from Dresden, organised hiking, rock climbing and active nature conservation developed early on in Germany, due to the imposing rock landscapes with table mountains, gorges and bizarre weathered forms. The E3 leads over the “Lilienstein”, the “Bastei” near Rathen, to Bad Schandau and finally to the Schmilka / Hřensko border crossing into the Czech Republic.

Consent for photo publication was given by all authors.

Towns on the E3

Neuhaus am Rennweg to Oberweißbach, Thuringia

Accommodation, supermarkets as well as railway stations or bus stops can be reached within a day.