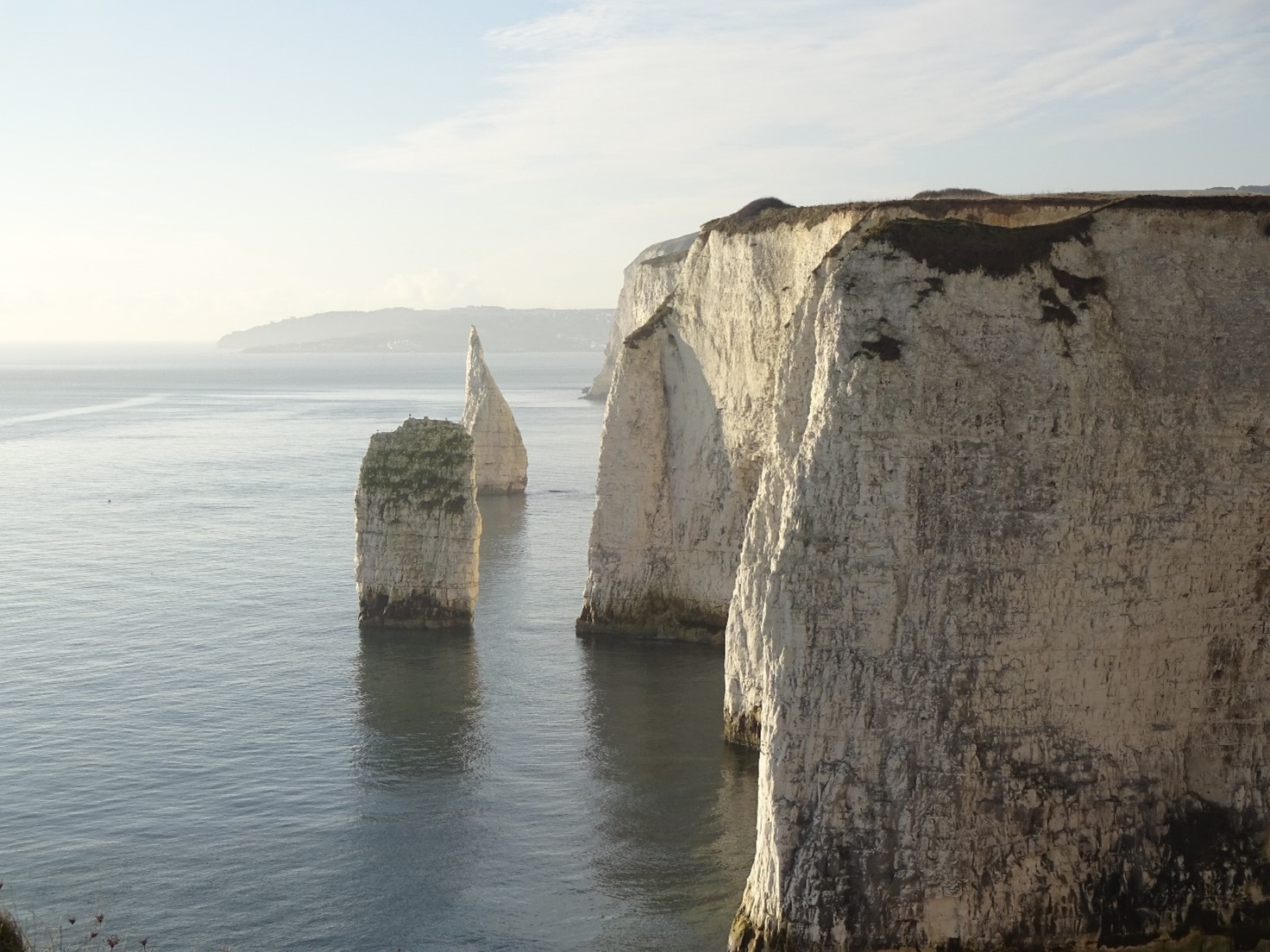 The E9 European Long Distance Path follows a number of local and national trails as it crosses the south of England. For the first half of the route, the trail follows the coast beside long beaches, high cliffs, fishing villages and tourist towns (make sure the seagulls do not pinch your fish & chips)! Then, to avoid urban sprawl on the coast, the second half of the E9’s path across the bottom of England heads inland, where it follows the higher ground of the chalk downs, and explores the south east corner of Britain. Expect cosy pubs, distant views and history including preparations for the D-day landings in the Second World War and the old warships HMS Victory and the Marie Rose in Portsmouth.

The E9’s starting (or finishing) point in the UK is at Plymouth, where a ferry joins it to the E9 in France. From Plymouth it follows the South West Coast Path east. This is one of Britain’s most popular National Trails, which are waymarked with acorn symbols, and the section followed by the E9 includes the English Riviera with the towns and beaches of Paignton and Torquay, and the Jurassic Coast, England’s only natural World Heritage Site, famous for its fossils.

At the end of the South West Coast Path, at the chain ferry which crosses the entrance to Poole Harbour, the E9 continues along the Bournemouth Coast Path to Milford on Sea. On OS Maps this section is marked as the E9 ELDR or E9 European Long Distance Route. This part of the E9 closely follows the seashore on promenades and by beaches with plenty of tourist facilities.

From Milford on Sea, the E9 continues on the Solent Way which travels through the “New Forest”, an attractive area of woods and heathlands famous for its ponies, to visit the city of Southampton. After following the shoreline on the east side of the Solent (a body of water) it next passes through Portsmouth, with its historic naval dockyard.

After Portsmouth the Solent Way continues around the incursion of sea called Langstone Harbour. The E9 leaves it at the town of Havant, where it turns northward, away from the sea on a linking section (marked the E9 on OS Maps) which joins the Staunton Way. This is a circular path, the E9 follows its western side to reach the Queen Elizabeth Country Park, where the E9 switches to the South Downs Way National Trail.

The South Downs Way follows a ridge of chalk on ancient routes with extensive views to the north and south. Lying within a National Park, towns and villages are avoided as the path follows the high ground. At Alfriston, the E9 joins the 1066 Country Walk. As all British school children know, this is the year of the Battle of Hastings and the Norman invasion of Britain by William the Conqueror. The E9 follows the 1066 Country Walk through the village of Battle, where the fighting took place, and onto Rye, an old seaport with a history of smuggling, now some miles from the sea.

For the final section, the Saxon Shore Way commemorates earlier invaders. The E9 follows it from Rye to Dover. Famous for its white cliffs, Dover is a busy terminal for ferries to Calais in France where it rejoins the E9.

Plymouth, for ferry to or from Roscoff in Brittany, France.

Dover, for ferry to Calais, France

709 kilometres, whether following the Isle of Wight variant or continuing on the mainland route.

A complete overview can be found at the Long Distance Walkers Association Website, ldwa.org.uk/ldp/public/e_routes.php although only members can download the GPX or similar files for their navigational devices. If you are planning to walk the E9 in the UK membership is recommended, however GPX tracks for most of the tracks the E9 follows are either available from the Walking Englishman walkingenglishman.com/ldp/ldplist.html , GPS routes gps-routes.co.uk/ , or the websites below.

The following websites give details of each section of trail, many have daily stage descriptions, GPX tracks available for download, details of accommodation and related information.

For the Isle of Wight variant, the E9 follows:

OS maps also label the E9 trail explicitly in places, at other times follow the above paths.

One publication is listed for each trail, however, for the two National Trails, several other, equally good guidebooks exist. For less popular trails, no guidebooks may be available.

Isle of Wight variant of E9: “Walking on the Isle of Wight” by P. Curtis, published by Cicerone

Staunton Way: “The Staunton Way” by B. Brunt, Kindle edition only, published by Amazon.

The Ordnance Survey of Great Britain (OS) ordnancesurvey.co.uk/ publishes excellent maps for the entire route. “Explorer” series maps on a 1:25,000 scale, showing features such as field boundaries, are ideal for finding the trail and for nearby facilities and sites, however, for a walk of this distance it is impractical to carry all the maps needed. Instead suitable maps can be loaded onto your GPS device or accessed with your smartphone using Apps such as OSMaps, although a subscription charge will likely be required. When using a GPS or smartphone for navigation, it is important when planning your trip to download or prepare a track of your intended route and load it onto your device. This makes it much easier to find your way. If using a smartphone, download the maps required as a mobile signal cannot be guaranteed.

In general, the E9 is not waymarked in Britain, instead follow the waymarks for the individual trails cited above.

The E9 joins the Dover branch of the E2 by Folkestone.

Lodgings are abundant on the E9 in Britain, this is not a remote, wilderness trail. The coastal section passes by many tourist towns and villages with a variety of accommodation options: Bed and Breakfasts, guesthouses, rooms at Pubs and hotels. Inland on the second half of the route a detour off the path can be expected in order to reach a village or town with evening accommodation. Campsites can be found throughout the route, although not every night. The areas crossed by the E9 are not suited to wild camping, which is illegal in England unless you have the permission of the landowner (although it can be difficult to know who they are).

To find accommodation, the websites cited above for the individual trails may be useful, Google Maps and sites such as Booking.com, or for camping Pitchup.com, are other sources of information. Note that in July and August, accommodation can become fully booked, and advanced reservations are recommended.

On the coastal sections there will be cafes and restaurants as wells as shops. On the inland section, it may be necessary to deviate off route to purchase food, and find water.

Larger settlements will have access to buses and maybe trains. Google Maps or the website Rome to Rio www.rome2rio.com are among the best ways to find options. The start and end points of the E9 are designed to link up with ferries, and also have rail services.

Although there are steep sections to climb up and down, this is not a challenging area to walk in, nevertheless proper hiking gear should be carried. Britain is known for its rain at any time of the year so a waterproof jacket, over-trousers and dry bags or a backpack cover will be needed to protect you and your possessions. Heat and sun may also be encountered outside winter, when sunscreen and a hat is needed. In winter snow is unlikely (but possible), however mud is inevitable so consider footwear and gaiters, and high winds and storms along exposed coasts, may mean a delay of a day or two is wise. A GPS device with spare batteries and a smartphone with a hiking App installed (such as OSMaps) is recommended for navigation, or 1:25,000 maps and compass and the ability to use them.

Weather information can be obtained from various sites including the Met Office  metoffice.gov.uk/weather/forecast/uk .

An example of a blog about walking the United Kingdom section of the E9 coastline.life/category/coastline/countries/uk/ .