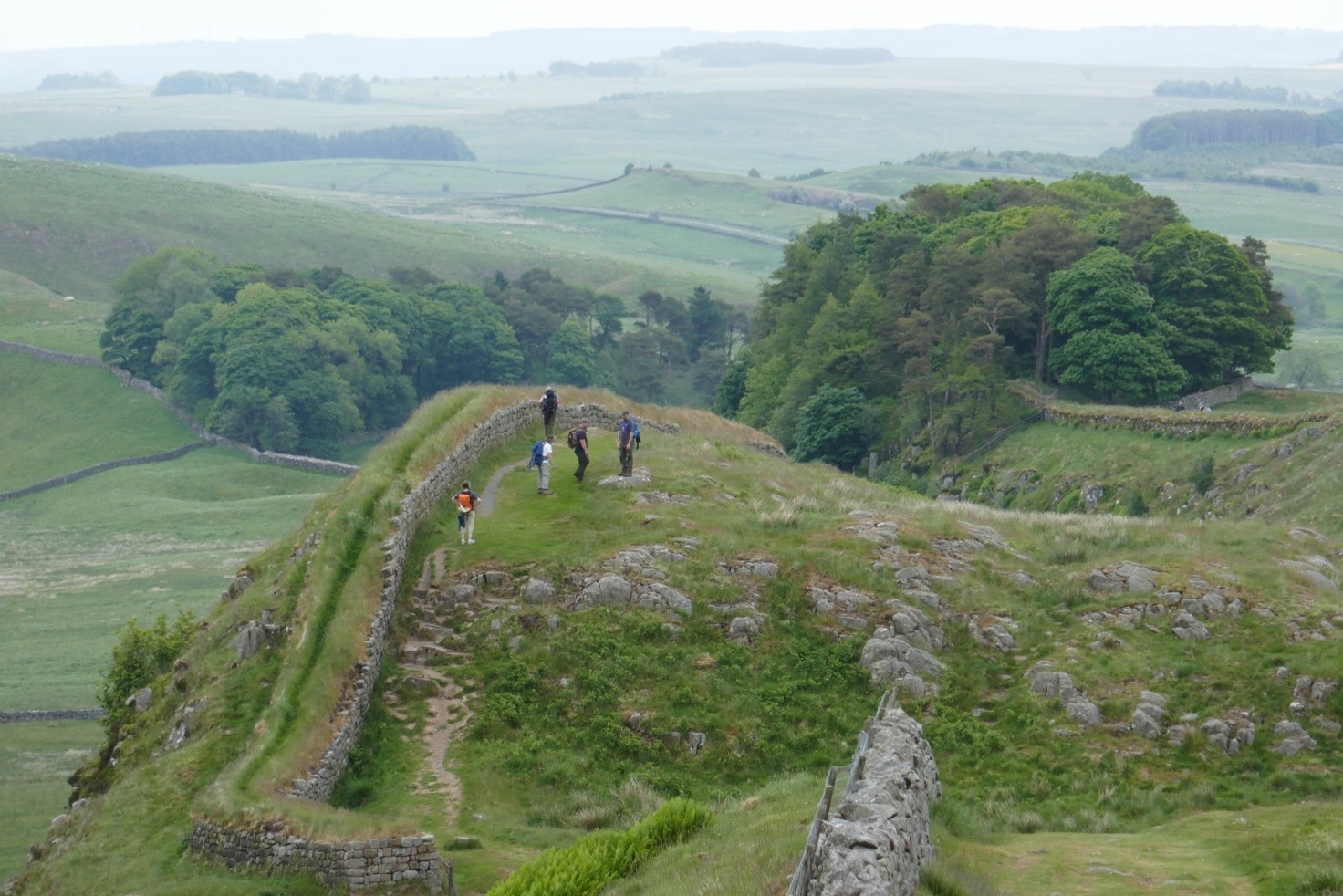 The E2 follows National and Local trails to take the walker through a diverse collection of the finest landscapes in the British Isles, from mountains in the northern part of the route to rivers and flat or gently undulating farmland later on. Ancient remains are visited as are historic towns such as Oxford, Cambridge and Ely (and some equally old Pubs). Currently the trail starts in Stranraer, Scotland near where ferries arrive from a future section of trail in Northern Ireland. From Stranraer the E2 follows the Southern Upland Way across the beautiful mountains of Southern Scotland on often remote, moorland paths. At the border town of Melrose, famed for its Abbey ruins, the E2 switches to St Cuthbert’s Way, for a gentler trail on a religious theme to link up with the Pennine Way. This is the oldest of Britain’s National Trails and runs down the mountains that form the backbone of Britain, starting with a 43 kilometre ridge walk without accommodation over the Cheviot Hills following the border between Scotland and England. Later the trail follows a part of Hadrian’s Wall (photograph above), built by the Romans in the 2nd century to keep out warring tribes to the north.

After the dramatic glacial valley of High Cup Nick and the waterfall of High Force the E2 splits into two alternatives at the town of Middleton-in-Teesdale, one leading to the port of Harwich (to join up with the Netherlands section of the E2) and the other to Dover (to connect to the E2 in Calais, France).

The Harwich branch follows the River Tees from the mountains of the Pennines to the urban, industrial centres around Middlesbrough, from which there is a link to the Cleveland Way. The E2 follows this National Trail down the coast of Yorkshire passing seaside towns such as Whitby, whose Abbey inspired Bram Stoker’s Dracula, and Scarborough. At Filey the E2 heads west on the Yorkshire Wolds Way, experiencing the gentle hills and dry valleys of the chalk landscape, ending at the mighty Humber River. After crossing the river on a long, graceful suspension bridge, the E2 follows the Viking Way through the English countryside, visiting the historic town of Lincoln, the stained glass in its cathedral is especially splendid. Reaching the large artificial lake of Rutland Water, the E2 continues on the Hereward Way, leading into the Fens. Once a marshland where Hereward the Wake fought the Normans, it has now been drained and is fertile, flat farmland with wide skies and impressive sunsets. From Ely the E2 follows the Fen Rivers Way to the ancient university town of Cambridge. A series of trails then carry the route, following some ancient road ways, to the port of Harwich, where ferries leave for the Hook of Holland (Den Haag) and the next stage of the E2.

The Dover branch continues down the Pennine Way from Middleton-in-Teesdale via the highest pub in Britain at Tan Hill and the limestone pavement and cliffs of Malham Cove. Shortly after the ridge of Standedge the E2 skips the last bit of the Pennine Way and follows various trails on hills and valleys around the edge of the mighty conurbation of Manchester and its satellite towns. The Gritstone Trail then takes the E2 south along ridges of coarse grained sandstone with stunning views. Gentler landscape follows on the Staffordshire way with sections of river valley and canal. Further south the Heart of England Way leads the E2 into the Cotswolds, officially designated an “Area of Outstanding Natural Beauty”. Its rolling hills are formed of Jurassic limestone, quarried to build villages of golden yellow stone that are characteristic of the area. From the popular tourist town of Bourton-on-the-Water the Oxfordshire Way heads east to join the Oxford Canal at Kirtlington. A delightful walk follows along the canal through Oxford, an ancient university city of dreaming spires and the setting for many books, a visit to the pubs of the town is essential. Another National Trail, the Thames Path follows the mighty river by water meadows and towns such as Henley, famous for its boat race (watch people practice their rowing skills as you walk down the river) and Eton, known for its school, in the shadow of Windsor Castle. Leaving the River Thames at Weybridge, a long section of towpath on the Wey Navigations links the E2 to the town of Guildford. Finally the North Downs Way National Trail follows the chalk escarpments and wooded hills east, ending at the white cliffs of Dover where ferries leave for France.

A complete overview can be found at the Long Distance Walkers Association Website, ldwa.org.uk/ldp/public/e_routes.php although only members can download the GPX or similar files for their navigational devices. If you are planning to walk the E2 in the UK membership is recommended, however GPX tracks for most of the tracks the E2 follows are either available from the Walking Englishman walkingenglishman.com/ldp/ldplist.html , GPS routes gps-routes.co.uk/ , or the websites below.

The following websites give details of each section of trail, many have daily stage descriptions, GPX tracks available for download, details of accommodation and related information.

One publication is listed for each trail, however, for the most popular trails several others, equally good or better, may exist. For less popular trails, no guidebooks may be available.

The Ordnance Survey of Great Britain (OS) ordnancesurvey.co.uk/ publishes excellent maps for the entire route. These show the national and local paths that the E2 follows, with any short linking sections between these trails marked “E2 European Long Distance Route”, “E2” or “E2 ELDR”. Ordnance Survey’s “Explorer” series maps on a 1:25,000 scale, showing features such as field boundaries, are ideal for finding the trail and for nearby facilities and sites, however, for a walk of this distance it is impractical to carry all the maps needed. Instead suitable maps can be loaded onto your GPS device or accessed with you smartphone using Apps such as OSMaps, although a subscription charge will likely be required. When using a GPS or smartphone for navigation, it is important when planning your trip to load or prepare a track of your intended route and load it onto your device. This makes it much easier to find your way. If using a smartphone, download the maps required as a mobile signal cannot be guaranteed.

The E2 is not waymarked in Britain, instead follow the waymarks for the individual trails cited above.

The E2 crosses the E8 at the Humber Bridge (Harwich branch of E2) or Broadbottom (Dover branch).

The E9 joins the Dover branch of the E2 by Folkestone.

In general the E2 runs close to well populated areas with facilities available, however there are a few remote sections in the north where some thought is required for food and sleeping.

Details of accommodation can be found on some of the websites above, otherwise use Google Maps, Booking.com and/or similar websites and Apps to find somewhere to sleep. In general there is some accommodation available each night whether Bed & Breakfast in someone’s house, an Inn, a hostel, a hotel or, if carrying a tent, a campsite. One exception is the Cheviot Mountains on the Pennine Way, however Forest View Walkers Inn in Byrness forestviewbyrness.co.uk/ can arrange pick up and drop off. The other difficult section for accommodation is the Southern Uplands Way in Scotland where there are some long, difficult sections without facilities. Pick-ups from nearby lodgings could be arranged or it is possible to sleep in “Bothies”. These are remote huts or old cottages lacking any facilities, you will need to bring a sleeping bag and food. Alternatively, wild camping is legal in Scotland away from housing. In England it is illegal unless you have the permission of the landowner (although it can be difficult to know who they are).  Nevertheless if camping overnight in remote areas of moorland or forest, and leaving no trace, you are unlikely to attract attention. If not planning to carry camping equipment, it is particularly important to book ahead in areas where accommodation is limited, as it may be full, especially in the peak season from Easter to the start of September. In winter months such accommodation may also be closed.

Outside the remote areas cited above, there is usually some possibility to buy food or a meal each day although options may be limited. Pubs are the most likely place to find food in villages, however, stopping for a coffee and cake at a village tea shop is one of the delights of walking.

Larger settlements will have access to buses and maybe trains. Google Maps or the website Rome to Rio rome2rio.com are among the best ways to find options. The start and end points of the E2 are designed to link up with ferries, and also have train services.

Especially in the north, the hiker will need footwear suitable for rough and boggy terrain. Gaiters can help protect from some of the mud that will be encountered. Britain is known for its rain at any time of the year. Waterproof clothing and dry bags or a backpack cover will be needed to protect you and your possessions. Heat and sun may also be encountered outside winter, when sunscreen and a hat is needed. In winter snow will affect high ground and northern areas and special skills and equipment may be needed. Even without snow, the wet and wind can cause the onset of hypothermia on exposed ground surprisingly quickly and suitable warm and waterproof clothing is essential. A GPS device with spare batteries and a smartphone with a hiking App installed (such as OSMaps) is recommended for navigation, or 1:25,000 maps and compass and the ability to use them. As noted above, you can find accommodation for most of the route, but you may need to consider carrying light weight camping equipment for more remote sections or to reduce costs.

Especially for the more remote northern sections the weather forecast should be consulted. In addition to the usual information on temperature, rain and wind the Met office also supplies weather warnings and specialist forecasts for certain mountain areas metoffice.gov.uk/weather/forecast/uk .

The main tourist organisations in England and Scotland have websites that can provide general information, see visitengland.com/ and visitscotland.com/ .